Seward is the cutest little town! Like I said in one of my other posts, I was really excited about all the wildlife experiences that Alaska has to offer. We heard some good things about Seward and the marine life boat tours they offered. Of course, I was all up for that!

The cabin we were staying in was in Soldotna, AK so it was a couple hour drive to get down to Seward. a month or so prior to the trip, we booked a Kenai Fjords wildlife tour through Major Marine Tours (https://majormarine.com/tour-areas/kenai-fjord/). This company seemed like one of the main companies in the area for tours and they have a ton of options for different tours. The tour we chose was a 3.5 hour tour that took you out and around Resurrection Bay. The had an inside and outside area for you to sit, snacks/coffee, binoculars, and a wildlife book.

We had a really informative and knowledgeable ferry captain. She knew a lot about the different animals and had quite the eye for spotting the animals as well. On this tour we saw a humpback whale, eagles, puffin, harbor seals, otters, puffins, and sea lions.  It was quite chilly and foggy the morning of the tour so it was difficult to see that far into the distance or to see glaciers. It did end up clearing up at the end of the tour and for the rest of the day in Seward.

The one otter that we saw during the tour was quite far away but no worries because there are some regulars that come into the bay for food. Sure enough, the otters were lounging in the bay when we walked down the dock! I am quite overjoyed by otters and all of the cuteness they exude so I was quite excited that the otters were there. The one that was closest to the dock was napping while the other one that was farther away was eating. These cuties sure made my day! 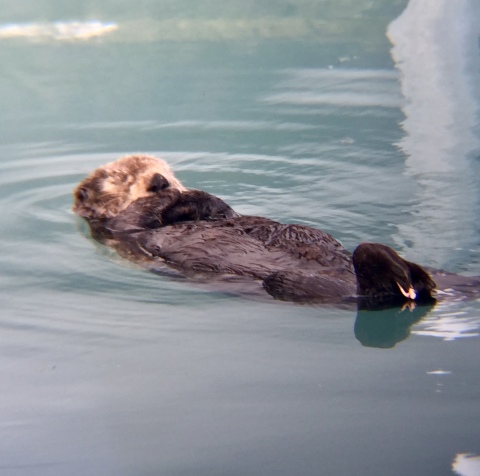 After ogling over the otters, we walked back up to the main street for lunch. We ate at a place called Rays Waterfront. They had quite the delicious seafood and most everyone in the party got Halibut Fish & Chips. They also had some pretty tasty clam chowder soup. And even better, this restaurant was right on the bay so we got a nice view of the otters from inside!

After lunch most of the group decided to go for a short hike to Exit Glacier. I did not join on this hike but the rest of the group liked it because it is short and doable for a lot of people. Along the trail, there are also markers of where the glacier was at during various dates in the past. It is neat to see where the glacier is at presently and see how much melting has occurred over the years. You can learn more about the hike here: http://www.alaska.org/detail/visit-exit-glacier

While that group went to the Exit Glacier hike, the rest of us stayed in town because we wanted to go to the Alaskan Sea Life Center (ASLC). But before going here, we decided to stop by for a beer at the Seward Brewing Company. One of the first things I look into when going to new places are what breweries are around so I was happy to find a brewery in Seward. This brewery had more of a restaurant vibe as they had a full menu but it was still a cool place to go and have some beer.

Now back to the Sea Life Center. This is the only sea life center that is authorized to take in injured or abandoned sea animals for the whole state. We had known about this sea life center prior to the trip and already planned going here. But it wasn’t until the night we stayed in Anchorage that I saw a TV commercial for animal encounters at the ASLC and of course I was hooked. The ASLC offers quite the variety of animal encounters and the day we were in Seward the center had 2 tickets left for an encounter with the baby otter! There was no way I was going to pass this up.

I got the last 2 tickets for my dad and I to interact and feed the 9 week old otter, Ranney! Baby Ranney was found by some people when she was just 1 week old with no momma otter. The ASLC goes through different themes every year for naming their animals. This year, the animals they got were named after the locations in which they were found. Baby Ranney was found near Ranney Glacier which, I guess, is quite far from Seward. But as mentioned earlier, the ASLC is the only authorized center to take in sea animals so this was her only hope.

As my dad and I were approaching the baby animal ICU, you could hear Ranney squealing at the top of her lungs! She was quite hungry! We got into the ICU and we prepared her bottles along with a tasty mix of squid, crab, and clams. Ranney was quite thrilled to get her bottles and seafood. After meal time Ranney decided it was time for some grooming. Let me tell you, an otter grooming itself is pretty darn cute. But a baby otter grooming session is more adorable than anything.

We also saw the rest of the Sea Life Center. It was fairly short but they had a lot of animals they are rehabilitating. The ASLC has the goal to release some of the animals after rehabilitation but sometimes it is not always possible. For example, Ranney, and a majority of otters in general, are not able to be released back into the wild as they become too dependent on humans. The center had some active harbor seals and the cutest puffins! When I stopped by the puffin exhibit, there was a worker doing an informal presentation with a baby puffin and he was quite fluff ball! They also had a variety of other birds, fish, and invertebrates.

That pretty much wrapped up our day in Seward and it did not disappoint!

View all posts by Caylin Delaroy