When I think of must see states, Alaska is definitely up there and it did not disappoint in one bit! Kyle and I were fortunate enough to get to spend some time in Alaska with his family and stay with some family friends who own a cabin in the Kenai Peninsula. However, my trip began a few days earlier than Kyle in Denali National Park with my dad. There was no way that I was going to go to Alaska and not invite my dad to join along. My dad said that if we were going to go to Alaska, then we were definitely going to have to make sure to go to Denali National Park. 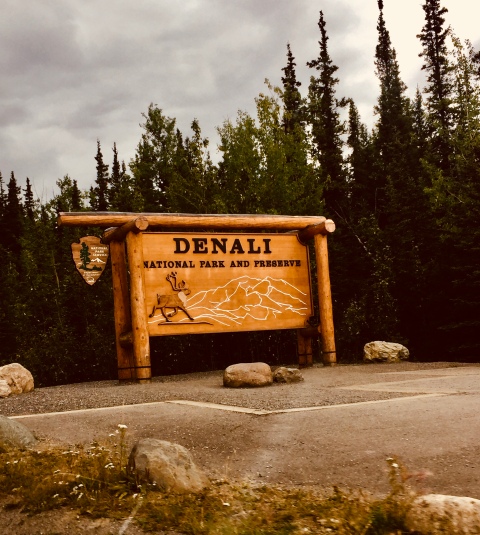 Our trip to Denali was planned for the first week of August 2018. Unfortunately, the weather was a bit rainy and cold during this time and I have heard from others that early in the summer could be a better experience weather wise. Of course, with have cloudy and rainy weather, my dad and I were hopeful to get a glimpse of Denali but we were not expecting it. Denali is such a massive mountain (standing at over 20,000 ft) that it creates its own weather and you sure could see it from a distance all of the storms happening up there.

Anyway, my dad and I started our adventure flying into Fairbanks and this is the closest airport to the park. We had to rent a car (and OMG are car rentals expensive!) and drive a few hours south to the park. As far as lodging, it books up quick! So make sure to start well in advance to you get a place to stay. All of the lodging right near the entrance of the park was already all booked. One of the only things I could find left was this quaint little B&B in the town of Healy. Healy is about 20 minutes north from the entrance of the park and I would definitely recommend staying there. This was booked through AirBnB and was called the Alaskan Chateau B&B (https://www.airbnb.com/rooms/23736602)

We arrived to Healy in the evening of the day and decided to do a little bit of exploring and grab a bite to eat. Right off the main highway near the entrance there are tons of little gift shops along the road so be sure to stop in there for a little souvenir! I have gotten really into collecting stickers of all the places I have been; particularly breweries and national parks! Our first night we went to eat at nice place called Alpenglow and I must say that they had some pretty delicious seafood.

So, the main attraction of going into Denali National park is to see some pretty kick ass wildlife. You can drive yourself into the park for the first 15 miles (which is paved) until you get turned around (Unless you have a permit for camping). To go the full road length into the park, which is 90 some odd miles, you are required to take a bus tour. There are a variety of different bus tours available to suit what you are looking for. You can learn more here: https://www.nps.gov/dena/planyourvisit/bus-tours.htm The bus tour is the best way to see wildlife in the park. 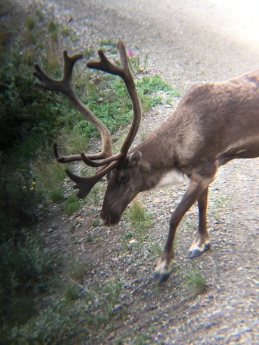 We ended up getting tickets for the transit bus to take us to Wonder Lake and back. (https://www.nps.gov/dena/planyourvisit/shuttles.html). If you do your research, you will see that there are different bus tours. We chose the transit bus and this tour is advertised as a non narrated trip and is cheaper than the narrated bus tours. However, we had an excellent bus driver and he narrated most of the trip anyways and he had been doing this gig for 20 some years. He was very knowledgeable about the park and knew some of the common spots where he had seen wildlife recently. He had told us there were 5 large mammals within the park including moose, dahl sheep, grizzly bear, wolf, and caribou. The bus driver had said that seeing all 5 in one day isn’t very common but I guess it was our lucky day because we got to spot all of them! Typically, it is wolves that people are not able to see and we were fortunate enough to find 2 packs of wolves both of which had wolf pups! We also saw plenty of bear cubs.

Side note: knowing that I was going to Alaska I wanted to make sure I had the chance to get some cool photos. I do not own a fancy ass camera so I decided to invest $25 bucks and buy a kit of lenses that you can place over your iphone camera. I must say, I was quite impressed out the outcome of my photos using these lenses for only $25. You can find a variety of different options on Amazon but the one I got was the Vorida 5 in 1 Cell Phone Camera Lens.

The bus tour made a few stops along the way so you could get out and snap a few shots. One of the main stops was at the Eielson Visitor Center where you can have lunch, take in some views (weather pending), and look around inside at their little museum. This visitor center has a massive 3D map of the whole park and has light up trails built in showing you different routes up Denali. Our bus driver also showed let me steal this picture he had taken of Denali below. This is the view you would get of Denali for the Eielson Visitor Center if it were a clear day.

Our end destination was Wonder lake (pictured below). We stayed here for 30 minutes and to get some nice pictures and there were blueberries everywhere! The blueberries were quite tart but it was still cool to try. This bus tour was one of the longer tours offered and it is a full day excursion. I was pretty tired afterward but it was a great way to see the park and all of the wildlife within. I would love to go back one day to try and get a glimpse of Denali

View all posts by Caylin Delaroy